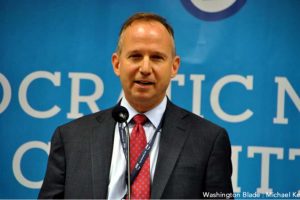 Markell was one of three people honored by the organization for his longstanding support for LGBT equality as he nears completion of his second term as governor. Under a state term limits law he cannot run for a third term.

“It was a great event because it really gave an opportunity for us to reflect on the progress we’ve made in seven years,” Markell told the Washington Blade this week in an interview.

“It is hard to believe that seven years ago it was legal in Delaware to discriminate on the basis of sexual orientation,” he said. “And not only did we change that, not only did we pass civil unions and then passed marriage equality and then we passed protection based on gender identity as well.”

Markell attributed his ability to help bring about those changes to the committed advocates associated with the Delaware Stonewall Democrats and other LGBT advocacy groups.

“And so although I’m the one who gets to take the very nice plaque home – the LGBT Hero Award – the truth is the real heroes are those in the community who keep fighting,” he said.

Peter Schott, the immediate past president of Delaware Stonewall Democrats, said the group’s annual summer fundraising event, held this year at Mariachi’s Restaurant in downtown Rehoboth, is typically attended by Democratic elected officials and Democratic candidates running for public office from all sections of the state, including Wilmington and Dover.

“This has always been a big statewide event,” he said.

Others who attended this year were U.S. Rep. John Carney (D-Del.), who is running for governor; State Rep. Pete Schwartzkopf, who serves as speaker of the Delaware State House and represents the Rehoboth Beach area; and Lisa Blunt Rochester, the state’s former Secretary of Labor who is one of three candidates running for Carney’s congressional seat.

Also attending were Sussex County Clerk of the Peace John Brady, who’s gay; and Delawarean and former Stonewall Democrats board member Anthony “Roddy” Flynn, who currently serves as executive director of the bipartisan LGBT Equality Caucus of the U.S. Congress in Washington.

Brady and Flynn were also recipients at the event of the organization’s LGBT Hero Award.

Schott said Stonewall Democrats members were especially appreciative of Brady, who is retiring this year. He is currently the only openly gay elected official in the state.

“Delaware and the nation have come a long way when it comes to LGBT rights, and we want to thank those who helped make it possible,” Schott said. “But we can’t rest on our laurels. Funds raised at this event will help elect LGBT-supportive candidates this fall.”

Markell told the Blade he’s supporting Carney to succeed him as governor.

“He’s somebody who gets it,” Markell said. “And I think he’ll be in a great position to help the state build on the progress that we’ve made over the last eight years.”

Following is the complete transcript of Markell’s interview with the Washington Blade, which took place Tuesday, June 28.

Washington Blade: What are your thoughts on how the Delaware Stonewall Democrats event went on June 25? Can you tell a little about what you said there?

Gov. Jack Markell: It was a great event because it really gave an opportunity for us to reflect on the progress we’ve made in seven years. It is hard to believe that seven years ago it was legal in Delaware to discriminate on the basis of sexual orientation. And not only did we change that, not only did we pass civil unions and then passed marriage equality — and then we passed protection based on gender identity as well.
And so we’ve made enormous progress in seven years and which is something we can all be proud of. But I think the other perhaps even more important point is that that progress was only possible because we had a group of very dedicated advocates.

And you know it’s fine for people like me to be willing to make these changes. But the truth is without advocates who lobby and who keep up the fight, these things don’t happen. And so although I’m the one who gets to take the very nice plaque home – the LGBT Hero Award – the truth is the real heroes are those in the community who keep fighting.

Blade: Do you see anything else that might be next? You will be governor through the end of this year, right?

Markell: In terms of law, I don’t know that we have a lot of changes still to make. But I think yeah it’s about being a welcoming and embracing community. And part of our thrust from the beginning – we’ve been so focused on the economy. And one of the most important things for building a strong economy is to be inclusive because the truth is the kinds of employers who we want to grow in Delaware care most about recruiting and keeping great talent. And great talent comes from many different backgrounds. And employers don’t care if their talent is white or black or Hispanic or Asian. They also don’t care if their talent is straight or gay.
And as a result, we need to make sure that we have a very nurturing, welcoming community and environment and set of laws and regulations so that everybody feels welcome here. That’s how you build a 21st Century economy. And I think in that way the fight is never over because you want to make sure that you continue to push the culture.

Markell: You know I think that it does. And I think the truth is we’ve had a great crowd of elected officials and candidates at that event for years now. And I think the LGBT movement has more than arrived in Delaware. It is fully part and parcel of our Democratic Party. And for that matter, some on the other side as well. This was a Democratic event. It was the Stonewall  Democrats. But the folks in the LGBT community – you can’t talk about our party without acknowledging the incredibly important and powerful role that many in the LGBT community play in our party.

Blade: You are term limited so you can’t run again for governor. But are you backing anyone to succeed you?

Markell: I am backing [U.S. Rep.] John Carney, who I think will be a great governor. He was at the event on Saturday. And he’s somebody who gets it. And I think he’ll be in a great position to help the state build on the progress that we’ve made over the last eight years.

Blade: Peter Schott, the immediate past president of the Stonewall Democrats, expressed concern that Republican State Sen. Ernesto Lopez, who represents the Rehoboth Beach area, voted against a proposed state constitutional amendment with non-discrimination language in it. Do you see that as having some chance of passing?

Markell: You know, because it’s a constitutional convention it has to pass by a certain majority of the General Assembly – I think in two consecutive General Assemblies. And since the governor is actually not a party to that I have just not paid as much attention to it. But I do think it’s a generational issue. And if it doesn’t pass this time it will pass because that’s just the nature of our state and our country becoming more accepting and more embracing of the LGBT community.