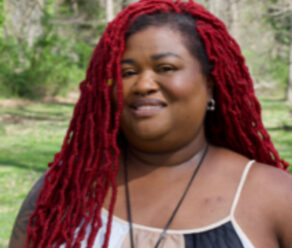 DeShanna Neal is a queer, mother of 4, is a  graduate of Wilmington University with a MS in Applied Family Science and a certified family life educator. Since sharing her story of raising a transgender child, she has been a public figure for families of LGBTQ children in Wilmington, Delaware for several years. She battled Delaware Medicaid for pediatric transgender services when her own transgender child was denied and after an eight-month fight, she won. Changing policy for all transgender and gender-expansive youth in the state.

She was the co-founder of Human Rights Campaign’s Parents for Transgender Equality initiative, organizer for Wilmington’s first Pride march, received proclamations of recognition from the City of Wilmington Mayor, the New Castle County Exec, and Wilmington’s City Council, is the former co-founder for PTK Delaware, the co-organizer and creator of New Castle County’s first ever LGBTQ Youth Pride Festival, as well as, Delaware’s first Drag Queen Story Hour. She also co-authored a children’s picture book, My Rainbow, with her daughter Trinity Neal. Two years ago, she founded her non-profit, Intersections of Pride Foundation, for Delaware’s often ignored LGBTQ communities to ensure they too have a place at the table.