Who is Barbara Gittings? 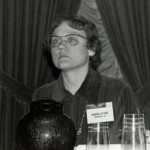 Barbara Gittings (July 31, 1932 – February 18, 2007) was a prominent American activist for gay equality. She organized the New York chapter of the Daughters of Bilitis (DOB) from 1958 to 1963, edited the national DOB magazine The Ladder from 1963 to 1966, and worked closely with Frank Kameny in the 1960s on the first picket lines that brought attention to the ban on employment of gay people by the largest employer in the US at that time: the United States government. Her early experiences with trying to learn more about lesbianism fueled her lifetime work with libraries. In the 1970s, Gittings was most involved in the American Library Association, forming the first gay caucus in a professional organization, in order to promote positive literature about homosexuality in libraries. She was a part of the movement to ge

t the American Psychiatric Association to drop homosexuality as a mental illness in 1972. Her self-described life mission was to tear away the “shroud of invisibility” related to homosexuality that associated it with crime and mental illness.
She was awarded a lifetime membership in the American Library Association, and the ALA named an annual award for the best gay or lesbian novel The Barbara Gittings Award. The Gay and Lesbian Alliance Against Defamation (GLAAD) also named an activist award for her. At her memorial service, Matt Foreman, the directory of the National Gay and Lesbian Task Force said, “What do we owe Barbara? Everything.”

The information above is courtesy of Wikipedia. For the complete Wiki article and information on Barbara Gittings, please visit http://en.wikipedia.org/wiki/Barbara_Gittings